Good morning, readers. I hope your Sunday’s shaping up well. If you’re on the US continent, east of the Rockies, and north of Louisiana, I imagine you too will have a snow shovel in your hands before too long.

Wednesday’s punk and post-punk gems will stay the same, but on Sundays I want to share a few more thoughts of themes from the book. For month two, then, I’m looking at chapter two, “From Sgt. Pepper’s to Born to Run: The Rise of Free-form FM Radio.” Through the  50s and into the 60s, the hysterical DJ dominated the AM airwaves, with promises of another “twin-spin sound sandwich” on a largely song-ad spot-song sequence. I couldn’t find an early aircheck for Murray the K. (also known as “the  5th Beatle”), but here’s one from 1966, just before Murray metamorphosed into a free-form DJ. 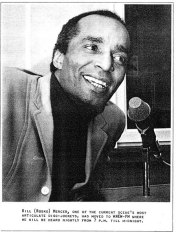 In the next year, though, the model has changed completely, and “Rosko” Mercer (not the UK’s Emperor Rosko), on WOR-FM, has turned things down, cadence-wise and volume-wise, and the corresponding change in music-as-pop to music-as-art leads to changes on the airwaves, too. Mercer, along with Scott Muni, led the charge at WNEW-FM into free-form FM radio, and he would segue from Coltrane to Shel Silverstein, and — as you can hear on this shorter segment — would improvise extended raps between songs and commercials, and share his own rather critical thoughts about the Vietnam War.

The 33 1/3 ethos, with minimal interference from commercials, made new demands on the listening audience, and upon advertisers to be more patient in terms of the frequency of their spots on the air. So, when Richard Neer at WNEW-FM raises the prospect of the live at the Bottom Line series to boss Mel Karmazin (now the head of Sirius XM), Karmazin couldn’t imagine how to make it happen — 90 minutes without commercials? It made little sense, but enough sense, and the Springsteen show ahead of the release of Born to Run sealed the deal. Four years later, The Clash were also included on the WNEW live series, now also at the Palladium, and we have the Guns of Brixton bootleg as a result. Thank you, Richard Neer, Rosko, and Muni!

For the rude boys and rude girls among you, check out Two Tone Britain. It’s not thorough by any stretch, but it does a solid job of unpacking the importance of the music and the politics of The Specials’ brigade against the backdrop of the rise of the National Front.

Happy Wednesday, folks! It’s an early taste of winter here in Ohio, with the high temps through Sunday hovering just above freezing. I hope your local climate is a bit more user-friendly in the coming weeks.

When The Beatles were in ascent, there was an odd relationship in the US, especially, between the LP and the single: they were expected to be mutually exclusive. Then the industry figured out that the single could represent the LP, and lo: everything changed, or  not quite everything.Following her departure from X-Ray Spex, Lora Logic formed Essential Logic and, in the DIY spirit of the day, they formed their own label for their debut single, and then released wax on Virgin and Rough Trade. Shortly after the November 1979 release of their debut LP, Beat Rhythm News, they released “Flora Force” as a 7″–which, of course, was not on the album.

Within a couple years, Essential Logic flirted with a more consonant sound, and “Music is a Better Noise” stands up well, 30+ years after. (Not the original video, of course.)

Greetings from radio K-SAT! I’m still waiting for a single hour in the 2-day forecast that doesn’t include a chance of rain, but in the meantime the tomato plants look awesome! (Speaking of tomatoes (and potatoes), does anyone else yearn for those bygone days when Dan Quayle was the most polarizing figure in US politics?)

As some of you know, Stealing All Transmissions tidies up a limited number of loose ends, and I figure it’s about time I apprise you of the whereabouts of a handful of the protagonists, aides, and abettors. Meg Griffin, of course, is still spinning discs for Sirius-XM Radio, and is also one of the key subjects of a new documentary, I Am What I Play. (Roger King is one of the masterminds of this project, and he’s a good guy, so do check this out when it arrives in your city.) Here she is with rock photographer extraordinaire (and insanely sweet guy) Bob Gruen, who still keeps busy on the other side of the camera. They’re pictured, of course, with Mr. G.’s book on John Lennon.

Joe Piasek, Meg’s partner-in-crime at WPIX, followed up their “Elvis-to-Elvis” experiment to work at Nickelodeon, where the management better understood the ethos he fomented at WPIX. As of August 2010, Piasek is behind the scenes (and occasionally on the air) at radio station WIOX-FM, out of Roxbury, New York. The station is this odd public-private partnership that broadcasts 24/7, with roughly 19 hours a day of live programming made possible by more than 80 volunteers. The facility is a former Masonic Lodge with plenty of space for in-studio performances, dances–the works. I had the chance to visit Joe there in 2012, and he’s still as properly restless as he was circa 1980 when it comes to business-as-usual. If you’re looking for a good cause to support, tune into WIOX, and consider joining their underwriting forces. (I’m presently tuned into Lizzie Douglas, who’s just schooled listeners that the inspiration for The Beatles’ “Good Morning, Good Morning” was a Corn Flakes commercial in the UK–just the thing that US historians might miss.) The transmission is analog and digital, and you can download the WIOX App for free at the iTunes Store. Given the struggles of radio in general, watch for this model to spread–all it takes is a few more mavericks who are willing and able.

Two more items of note: check out this lovely Clash fan site, which hosts over 3000 photos of the lads and descriptions in French.

Toronto, of course, played a big role in Clash history. As the tour bus readied in September 1979 to return to the US, Mick staged a sit-down strike until someone secured some marijuana. Luckily, some fan procured the necessary goods, and I’d like to offer my thanks to that person, as the legendary shows at the Palladium a few nights later might have otherwise never commenced. In case there’s interest: I am making a quick visit to Toronto on Thursday, 18 July, and while I wasn’t diligent enough to arrange a reading/signing that evening, I’d be delighted to meet folks for lunch and a chat about The Clash, the book, aging with punk and dignity, etc. If you’re interested (or know someone who’s interested), please e-mail me by 12 July, so we can make arrangements at a downtown eatery. Cheers!