Writers quibble over year-zero of punk: ’76, because that’s when things started rolling, or ’77, because that’s when key platters of vinyl by The Clash, the Pistols, Blondie, Television, and so many others hit the shops. The hardcore look back to Iggy and the Stooges, of course, or even Velvet Underground at Cafe Wha? way back when.

The night noted above, though, has got a decent claim to the most important weekend in punk history, in terms of guts, glory, and serendipity. On both sides of the Atlantic, the eponymous Ramones’ LP hit the shelves and, as Generation X’s Tony James noted, “The Ramones were the single most important group that changed punk rock.”

In London’s Nashville Room, The Sex Pistols opened for the 101’ers, and Mick Jones accompanied Bernie Rhodes to check out the 101’ers’ lead singer, Joe Strummer.

On the other side of the Atlantic, the crowd at CBGB was treated to the debut documentary of the punk scene: The Blank Generation, by Ivan Kral, then with Patti Smith’s group, served as the opening act for Johnny Thunders’ The Heartbreakers, just before Richard Hell set out on his own with his band, the Voidoids.

Kral’s film was a truly DIY affair, as you can see here. I do, of course, shine a bit more light in my book on one of the most important nights in the history of rocknroll. I’ll give the coda over to Richard Hell. Cheers!

Happy Sunday, folks! I want again to thank the four dozen or so of you who came out on Thursday for such a delightful event. Andy Leach and his crew know how to put on a good show, so an especial thanks to them.

For the last Sunday of January, I wanted to offer one more selection of one of the primary / secondary texts that made Stealing possible. As Stealing readers know, I also cite 4/23/76 as a key date in punk history, for the reasons noted below–and for the work of Ivan Kral and the key shows by The Heartbreakers at CBGB that weekend.

Jon Savage treats this incident quite smartly in England’s Dreaming, and here’s how Salewicz represents it in Redemption Song: 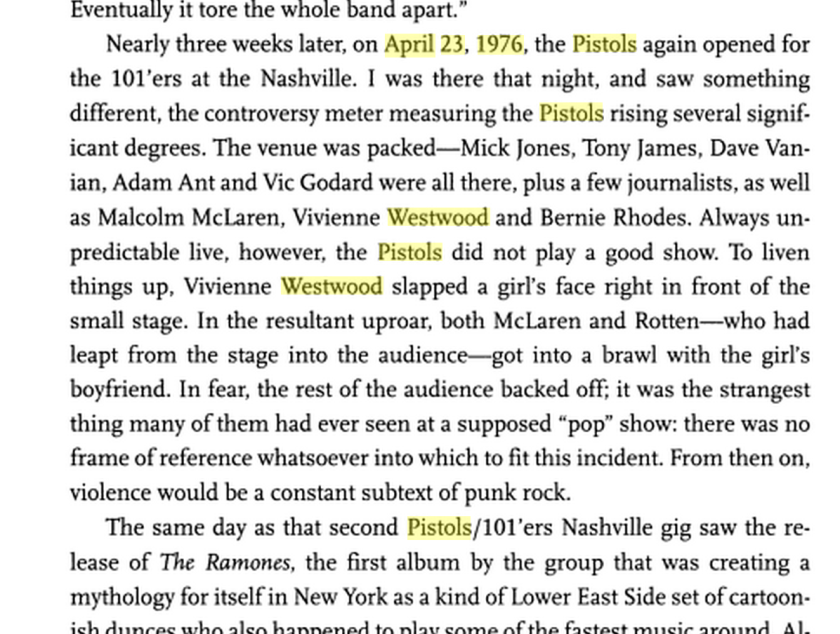 And, of course, the clincher is that CBGB is hosting the a weekend premiere of Ivan Kral’s The Blank Generation, and what I have concluded are the last appearances of Richard Hell with Johnny Thunders’ Heartbreakers on that three night bill.

All right: back to the snow-shoveling then something in a glass warmly. Cheers!

Thank you for tuning in to K-SAT on your radio dial.

In heritage-acts music news: Steve Howe announces departure from Yes, but perhaps that breaking news won’t break your heart. Howe, you may recall, was Keith Levene’s favorite guitarist while Levene held down a spot in The Clash, and Yes was name-checked on the wrong side of the bed on the legendary Loves/Hates t-shirt designed by Bernie Rhodes, Malcolm McLaren, and Vivienne Westwood:

When Public Image Ltd. made their May 1980 appearance on American Bandstand, they had themselves a snorting good romp. The sound’s better than the picture on this clip, but it’s clear to see John Lydon’s determination to do it his way: not lip-sync, have a laugh, and provide something memorable to the live and home-viewing audience.

At 1:27 he’s in the cheap seats and, at 2:15, he kicks down the wall between audience and performers by dragging one woman onstage, and then ushers up a couple dozen more. At 3:06 we’re hard-pressed to know which song the kids in the baseball uniforms are clapping along to, but it hardly matters. In the interlude, at Lydon’s behest, Clark invites all the audience members onstage, and Lydon makes the cameraman earn his wage by running around the back of the stage. By 7:00, the audience members are clapping along–in time, this time–to the song that Levene, Jah Wobble, and Martin Atkins have stopped feigning to play.

For many in the audience, the lyrical reprise of the query “Is this living?” on the backing tape could be answered with a resounding yes.

By 1980, Clark had been the host of Bandstand for 25 years, and 20 years before, somehow escaped the payola hearings that ruined Alan “Moondog” Freed’s career and, in turn, his life. Say what you will about Clark, he was savvy through-and-through, and eventually came to regard Public Image Ltd.’s performance that day as one of his favorites.

In a 2012 interview in Rolling Stone, Lydon himself regarded Clark with kindness: “I remember him quite well. I remember the wigs. He didn’t have to let us on and he didn’t have to be so kind to us and give us that opportunity. I really appreciated that. He could have been Godzilla to us. And PiL is an odd act to allow on a show like that anyway. It showed a great sense of rebellion in him.”

Lydon, like Strummer, enjoyed taking the piss out of bloated rock star’s claims to artistry and authenticity, and with due affection brings the punk ethic of  “destroy the aura” to the roost of Dick Clark–who had no illusions about the business, and likely wasn’t vulnerable to having wool pulled over his eyes. Fun times, indeed.

Coda: Do you figure most American punks and post-punks tuned into this show, and that Lydon’s sartorial choices had an influence on this guy in particular?