Hello, readers! I hope you had a fine weekend, and that the rising threat of nuclear annihilation isn’t getting you down.

After dedicating Wednesday’s underheralded gem to Graduate, the precursor to Tears for Fears, I got to thinking about hair, its importance, and Don DeLillo. DeLilllo and George Saunders are the currency, and the latter’s about as punk as you can get and still get paid to publish in the New Yorker. (More on Mr. S. in the next few weeks.)

I got started on DeLillo through White Noise (1985), worked my way through Mao II (a prescient commentary on political leadership and terrorism) and Libra (fictionalized bio of L.H. Oswald), and then was blown away by Underworld (1997). A tour de force with few peers, and the hardcover is cheap used, and it’s laid out gorgeously.

So, in White Noise, our protagonist is a professor of Hitler Studies who can’t speak German, and his wife is Babette, who’s general presence has left quite the impression on his colleague Murray:

“Your wife’s hair is a living wonder,” Murray said, looking closely into my face as if to communicate a deepening respect for me based on this new information.
“Yes, it is,” I said.
“She has important hair.”
“I think I know what you mean.”

Rarely, if ever, in White Noise, does one character know what the other means, in part because of the white noise of the media–and this was in 1985.

In the world of rock, of course, plenty of people have important hair, and sometimes that hair was seemingly more important before their moment in the brightest lights of the music industry.

We begin, of course, in 1962, the year Richard Starkey abandoned Rory Storm and the Hurricanes to take over for the recently deposed Pete Best.

And here’s his bandmate before his hair, too, was disciplined by the tyranny of Brian Epstein.

Chronologically, we check in with The Delinquents, whose lead guitarist, second from the left, encountered “good hair days” less frequently than his Beatle predecessors. (On the right he’s accompanied by Viv Albertine and Keith Levene.)

His eventual fellow-front man, stage center, drew upon Elvis’s up-style before dismissing him in 1977.

Before she joined Dragon’s Playground, which was followed by The Tourists, Ms. L.’s ‘do bided its time, waiting for just the right moment.

Fellow moptops-with-unrealized potential occupied duties in Graduate (1 & 2, L to R), before morphing into the well-moussed purveyors of “Cold Shelter” in a “Mad World.” 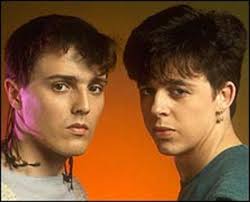 Okay, then. It’s been fun keeping things light (or lightly gelled) this week, and I look forward to sending out more tweet tributes to The Clash’s debut LP (@stealingclash) over the next two weeks. Enjoy!