Happy Sunday, folks! It’s been a delightful Thanksgiving holiday, with lots of fine food, drink, and friendship, along with the lone rehearsal for The Crooked Beat, my Clash cover band, for our one-off, 4-song gig at my book release party on 5 Dec in Oberlin. (If you’re interested, send me a note @ djaphasia [at] gmail dotty com.)

In thinking about this event, though, I think back to being 12 years old, a couple years before I traveled to the UK and my life changed forever. It was my fath 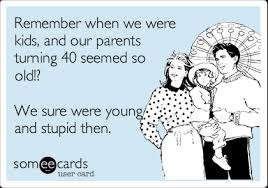 er’s 40th birthday, and the accompanying cake and presents spoke volumes: just 5 years before, in a joint birthday with a life-long friend, the cake was decorated in the image of a Budweiser can. Now, the cake itself was in the shape of a casket, and the primary gift was a black sweatshirt with a sans serif “40” on the front. The message was clear to the kids: live it up while you’re young, because when you’re 40, it’s over.

It was, of course, nearly all in jest, but only nearly. My father stayed plenty busy with work and coaching, and had stopped playing basketball. (Chuck Taylor’s didn’t offer aging ankles much support.) Soon he stopped playing softball, in part because of his commitment to my sister and me, and our extra-curricular activities. But my image of him was a paragon of adulthood–much more so than the past 10 years, actually, since he moved into an “active adult living community,” but that’s a whole ‘nother story.

Between now and then, though, it’s as if anti-trust suit was brought against the age-based monopoly of “youth culture,” and now 60’s the new 40, and sometimes with embarrassing results. Eloquent rants by folks my age about the corruption of today’s adolescents by shiny screens are sustained with impressive durability–unless, of course, they receive a text mid-way through, and then there’s no way in hell not to respond with lightning speed.

So, while I’m delighted to have my first book come out this relatively late in the game, and to be picking up bass guitar at my age (well north of 40), I remain ambivalent about the second endeavor. I’d like to think I’m playing at being a bassist to keep up with my daughter’s growing musical prowess, and not because I had some notion that youth-is-only-a-mindset, and that my glory days in music lie just over the horizon.

Soon enough, perhaps, I’ll be the sort of grown-up that my Dad was at this age, and then–once I’m acting my age–perhaps I’ll have more credibility asking the youth to act theirs.

Happy Sunday, folks. ‘Tis the season of the US’s finest holidays–Halloween & Thanksgiving–which remain secular for the most part, and of course provide a modest share of us to be thankful for what we have. Within a matter of hours, though, a less modest share of us descend upon the strip malls and big box stores and completely lose their shite.

I am especially grateful this week for having met and chatted with Gary Giddins, whose long-standing column in the Village Voice inspired me in the early 90s to imagine life as a jazz historian. (It didn’t quite work out that way, but I did write about swing-dancing and Ralph Ellison, whose own writing on jazz set the bar damn high.) Giddins was in town to present a lecture on jazz and photography, which should appear on Vimeo before too long. (I’ll update here and tweet anew if that happens.) Here’s a nice intro to a handful of jazz tunes by Giddins.

One of my favorite tales from the Giddins collection recounts, apropos, a tale of Louis Armstrong, when he was hired to accompany a pianist at a birthday party for a big figure in the mafia (probably in the early 1960s). It’s not difficult to imagine that maybe, just maybe, the don’s partygoers didn’t recognize Armstrong in all his human complexity, and got under his rather thick skin. In response, the pianist recalled, during a rendition of some pop standard, Armstrong started to scat, much to the amusement of his audience–and the gut-wrenching amusement of the pianist, who apparently was the only one in the room able to decipher the three syllables of the scat refrain: “Kiss my ass. Kiss my ass.” Armstrong smiled, and tears of sublime joy rained upon the piano keys, as the pianist kept due time as his tear ducts open (and kept his own mouth shut).

If you’re curious to see the latest news on Stealing All Transmissions, check out the latest reviews here. If you reside in Northeastern Ohio, and you’re available on 5 Dec for a book reading + dance party, send me a note at djaphasia [at] gmail for details.

Happy Wednesday, readers. Today’s post simply offers the musical accompaniment to Sunday’s post on punk covers, and includes a few of my favorite covers by boy bands, including The Specials, Devo, Elvis Costello, The English Beat, The Clash, and another ruckusly-inclined band to wrap things up.

More news about the book is coming soon. Until then, please stand up and pogo around the office to this musical selection. Enjoy!

‘allo, music mavens! Here’s the audio part of most of last Thursday’s show. It starts off well before ’77 with The Fabulous Counts, and includes tracks by Iggy Pop (from ’77), Game Theory, Costello, Guided by Voices, English Beat, Big Star, The Fastbacks, and The Corin Tucker Band. A bit more ‘merican than I usually do, but I think it’s a decent set.

Happy Wednesday readers! After close to eight years away, I got back in the DJ booth last week at WOBC, our local college and community radio station, for an hour of “The Spirit of ’77.” I’m rusty, and It’s a mixed bag, of course, with great tracks from ’77 and after, some of the tracks that inspired all that gorgeous noise in ’77, and a few foils, too, just to remind us what that joyous ruckus was about.

Do get past the first 45 seconds certainly, which is a non-punk prelude, and then you’ll encounter a host of fun items without DJ patter this time, including The Au Pairs, the Dolls, Costello, The Clash, Scritti Politti, Pixies, Public Image Ltd., Patti Smith, Lorde (yes Lorde!–outside of hip hop, she’s best we’ve got today on social class), Television, Sleater-Kinney, and Gang of Four. Send me a note if you need info on any particular track. I’d post them in order, but that prevents a bit of serendipity, yes?

And here’s a link to a show that just went up in NYC, with great images of the Beasties, Madonna, and others, as just kids. And some of The Clash in various iterations, too.

Thanks for tuning in. I’m back on the air Thursday, 5-6pm, EDT, at wobc.org, and 91.5 FM in Northeast Ohio. Thanks for checking in!